Bab Lamrissa square is situated outside the old walls of Salé city, and its existence is linked to its historical role. It was the river port of the city. All the ships which used to enter the city anchored there. It got its reputation  from Bab Lamrissa or the door of the “small port” which was set up by the Merinid Sultan Abu Youssuf Yakoub Ben Abdelhaq Almarini in the year 1270 A.D . It played an important role during the period of Sea Jihad. What made it most famous was that Sultan Abu Yakoub Abu Yusuf sent from it in 1285 A.D many ships to attack the green island in the southern coast of the Andalusia, and their number was 36 sea war ships.

In spite of the dangers which affected Bab Lamrissa Square since 18th century , so it was subject to river sands which almost swept its identity, and also the effects of cement invasion since 1920 which did not respect its specificity as a historical landmark of the city, this square has always constituted an open space for many cultural and entertaining activities which the city adopted.

Also it is a rest space for inhabitants, especially after being recently restored according to the applicable criteria in the field. So, the wall next to the old city was painted with regard to historical and technical specificities. Also, stones were put back in their place in a professional and coherent way to respect the wall’s historicity.

With consideration to the importance of the ecological side to the square, considerable spaces were set to be green, which rendered the square more beautiful and attracted visitors. 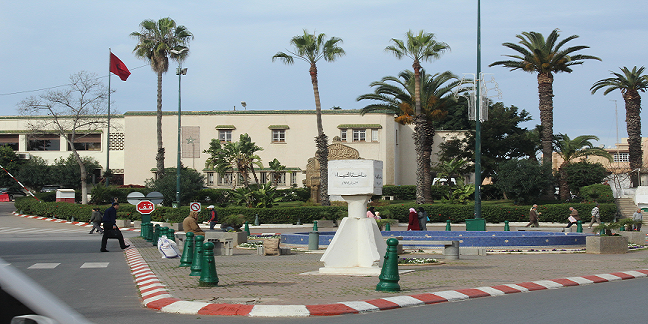 Bab Bouhaja square is one of the famous ones in the city. It has been known for its historically ancient gate, “Bab Bouhaja”, which was subject to decay in the sixties of 20th century, and it takes the name of the righteous Andalusian wali Sidi Brahim Bouhaja Arrundi, who took care of preserving  Zawit Annussak  in the 14th century. The name of Achouhada Square was associated to the well-known national occasion on January 29th 1944, from which a national revolution  which supported the contents of the petition of asking for independence  on January 11th 1944, and which protested against aggressive treatment of  nationalists after presenting  this historical document which incarnated the will of the throne and the people for  freedom and emancipation from French colonialism. 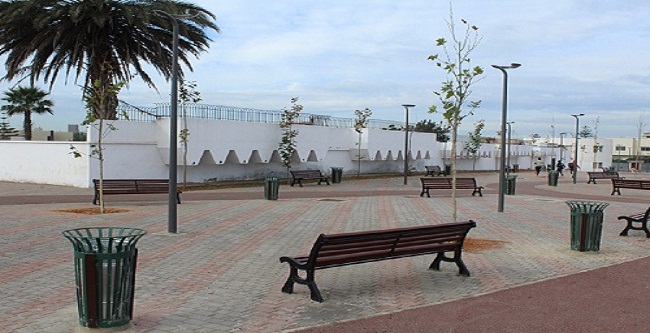 Palestine Square is a special Space to which the inhabitants of Bettana neighborhood with different social classes resort for relaxation and entertainment.

Through its efforts to qualify neighborhoods  of  Salé city and enabling them of equipped spaces which contribute in their attraction, the commune of Salé managed Palestine Square.

The management of the square included enlarging it on a surface of 7500 m2, planting trees,cementing passages, equipping them with benches and electric posts, using lamps safe to the environment from the kind of LED.

The square was also decorated with metal which gave it a distinguished beautiful  shape.To keep the space clean, garbage bins were fixed in different parts of the square.

To enable different categories of entering the square, a design was adopted to give access to people with special needs.