H‘ssaine as an urban commune with a symbolic personality and financial independence was created in accordance with the decree  number 462.92.2 issued on the  June 30th 1992 which specifies the number of circles and administrative annexes  and urban and rural communes. And in 2003, and after applying the system of the unity of the city in compliance with the law nb 78.00 related to the communal chart in conformity with the dhahir number 1.02.297 on October 3rd 2002, Ahssin district has become one of the five districts which form the urban commune of Sale. 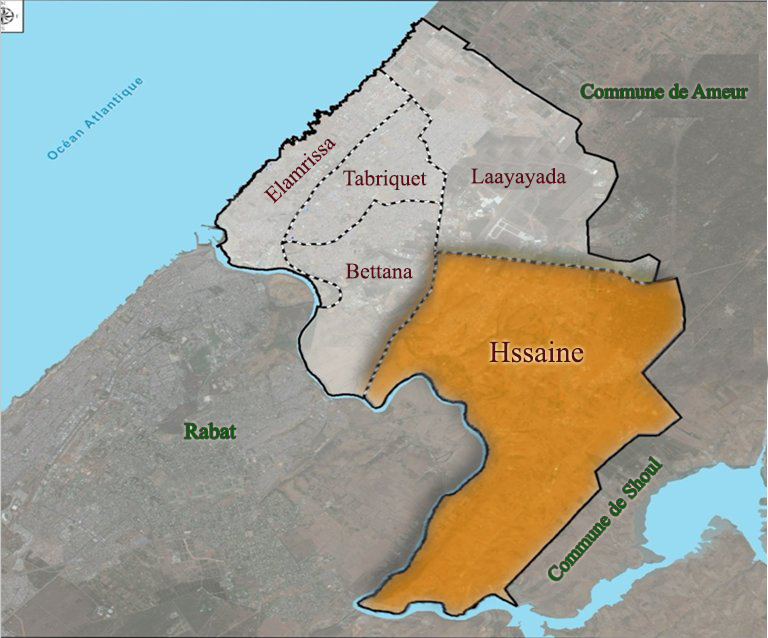 H‘ssaine district is situated in the south-east of Sale city .It is limited from the north by district Laayayda,from the south by Assuhul commune and basin Abu Regreg,from the west by district Bettana an Abu Regreg basin,and from the east by commune Assuhul.  Its surface reaches about 37,29km2 and it is about 105 m higher than sea level, and the average rain falls 545 ml a year, and the average heat is about 24°c .

The number of its inhabitants is estimated at about 214 540 people according to the general  census of inhabitants  and habitats of  the year 2014, and with that it represents 24% of the whole population of the city which reaches 890 403 people.

H‘ssaine district is one of the five districts which form the urban commune of Sale and which is part of the territory of Sale prefecture.  In it there are three bureaus of the civil state and confirming signature: