“A large city with diverse characteristics” 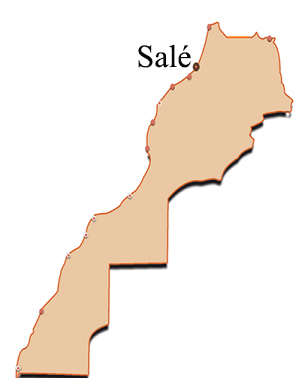 Sale city is located in the region of Rabat –Sale-Kenitra  on a global surface estimated at 95,48 Km2 ,it is limited from the east by Province khemisset, from the south by prefecture Rabat, from the west by the Atlantic ocean, and from the north by the Province  of Kenitra.

Sale belongs to a nearly wet climate, with changes from nearly dry to wet. Because of the influence of continental and sea currents, the average of rain falls is between 500 and 600 ml a year. And the rain period lasts between October and March, whereas the dry period from April to September, it varies between 8° in winter and 30° in summer. Snow almost never falls.

Internationally, Rabat Sale airport is a gateway to the external world .And the existence of the city on the Atlantic coast is an important factor giving a real opportunity to set up a sea outlet on the world.

The tramway project strengthens the net of urban traffic:

Urban transport has a big importance for the city inhabitants, either in the urban axis of Sale or outside it, especially that a large number of inhabitants move daily to Rabat. For this reason the tramway  project , which is part of the management  of the banks of Abu Regreg river, enables to join Sale with both Rabat and Temara. The first line puts together Tabrikt in Sale with neighborhoods of university and medical institutions in Rabat, whereas the second line joins neighborhood Betanna in Sale and neighborhood the ocean in Rabat.

Water as a vital substance is available in a sufficient way

The forest field of Mamora stores an important water fortune in the form of a water bed  which takes its sources from the south then gets larger to the North , North east and north west. This water bed can be divided into three parts. One of them ,which is called coastal concerns Sale city, and it covers a surface estimated at about 390km2.

Maamora forest goes along Sale city in its North Eastern frontiers. And it is formed basically from oak trees  which are considered a real lung to the whole wilayah and an oxygen reservoir which plays a major role in the ecological equilibrium  of the region . The flora of the forest also plays an important role in protecting the water bed .This forest has always constituted a natural recreation to the city inhabitants ,to their relaxation and sightseeing.

Sale, an ancient historical heritage and a diversified natural context:

Surrounded by historical walls along 4,3Km, the old city of Sale presents a group of landmarks which reflect its historical richness, among them: the Merinid school founded by Abu Alhassan Almarini  which opened its doors in front of people after its restoration, historical gates like Gate Elmerissa, Gate Fes, the fountains, canals for bringing water, the market of arches, Alqissariyah,the market for weaving, Dar Albaroud …all of them are squares and landmarks no tourist guide would fail to mention. Also ,the location of the city on the right bank of Abu Regreg river and on the Atlantic coast (with the presence of a rocky  beach ), besides its proximity to Maamoura river makes of Sale a city with interesting touristic potentials and promising prospects.

Traditional industry and textile industry are distinguished activities in Sale: 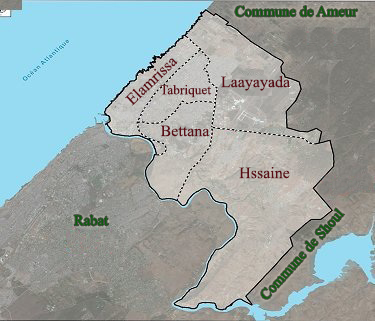 Concerning the activities of the inhabitants, the sector of public administration (in Rabat and Sale)is considered the first employer to the city inhabitants, followed by the sectors of industry, traditional industry and commerce.

Traditional industry is the most important sector in the city, Sale represents the third national pole in this field after Fes and Marrakesh. Kariat Alwlja is considered one of the places where we have a number of crafts, it includes hundreds of specialized traditional units, which were able during a few years to form a grouping of traditional Moroccan Arts.

In the sector of industry, textile takes the first position in the number of units, followed by chemical and pseudo-chemical industry then the sector of food industries.

Tourism in Sale: real potentials to promote the sector:

Concerning tourism, the diversification of the natural field and the richness of the historical heritage of the city, both form real and promising potentials to promote the sector.

The operation of managing the banks of Abu Regreg river, with the projects it includes to set up new touristic structures, forms a new attraction factor for the city. The project of managing a new tourist station on the beach of nations(in Boulqnadel commune) will enable of setting up new structures(golf fields…) capable of attracting more tourists.

From another side, the sector of sea fishing as a traditional activity finds a promising opportunity to prosper especially with the project of managing the mouth of  Abu Regreg river, which also allows for new sea activities to evolve and develop.