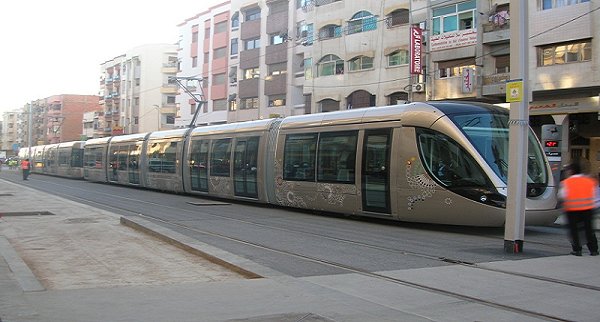 Tramway Rabat Sale is a system of transport through railways to serve inhabitants of the urban agglomeration of Rabat Sale.

This project which was inaugurated by his majesty Med VI on May 11th , 2011 is considered one of the convenient solutions to the problem of urban transport in the two cities since it satisfies  the increasing demand for transport  .It also provides a real alternative to using cars, and because it aims at simplifying the movement of traffic and circulation and rendering it easy to  Rabat Sale through adopting means of transport and traffic which respect the environment and guarantee the conditions of safety and organization at work.This project is one of those which gained priority in the context  of  managing and developing the banks of Abu Regreg.

The current web of the tramway consists of two rails whose length reaches 19,5 km and which have 31 stations.

The web covers the most important urban poles that know a high population density of inhabitants and their movements (university neighborhoods, hospitals, administrations, the centers of the two cities, the important road and train stations).

Wagons used, and whose length reaches 32 m, are characterized with a design that respects international criteria and they have air conditioning equipments and  entrances for people with special needs.

The project whose launch of work was given by his majesty Med VI on December 23rd, 2007, was performed by the agency of management of the banks of Abu Regreg in partnership with the local communes of Rabat Sale. Starting from January 2009, the company of the tramway of Rabat Sale which incorporates among its contributors the commune of Rabat Sale the one which supervises   the work proceedings .

It is likely to extend the two current lines to reach new places in the direction of Temara, New Sale and other areas. 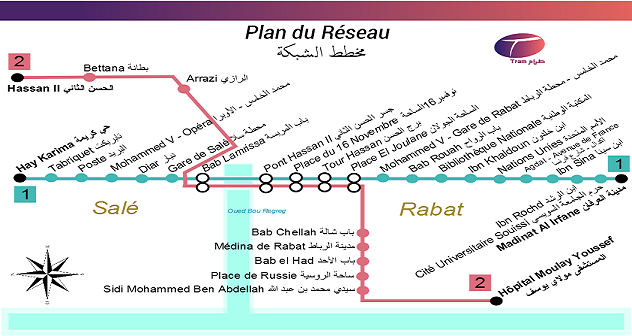