“The fight against illiteracy, between strengthening the dignity of the citizen and support for local development” as the theme of the project “Thursday Concertation of Salé”

The municipality of Salé organized, in the framework of the project “Thursday Concertation of Salé “, a consultation meeting on the theme “the fight against illiteracy, between strengthening the dignity of the citizen and support for local development »; and this, Thursday, December 7, 2017, around 15:00, at the Great communal Hall located in Bab Bouhaja. 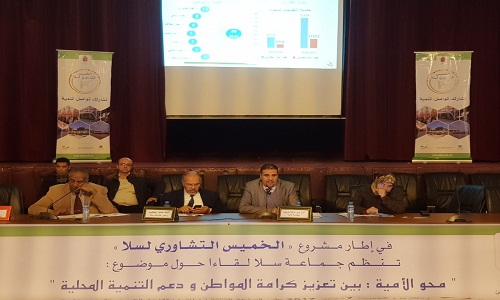 Speaking at the opening of this meeting, the president of Salé commune, Jamaâ Mouâtassim, stressed the importance of the fight against illiteracy, which constitutes a major challenge to Morocco’s overall development efforts.

He recalled that combating this phenomenon is one of the government’s priorities, in accordance with the provisions of the Constitution, which guarantees the right of citizens to modern, accessible and quality education.

In this sense, he added, he has adopted the adoption of multiple initiatives and programs, likely to contribute, according to several studies and indicators to the reduction of the illiteracy rate, noting that the biggest challenge we face today lies in eradicating this societal phenomenon by strengthening the dignity of citizens and facilitating their integration into the development process. 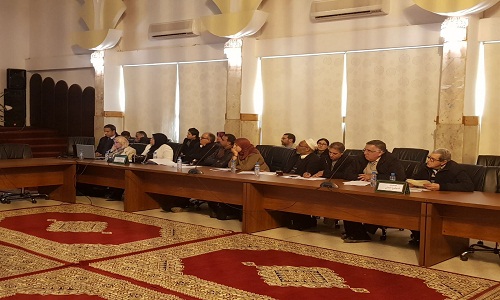 Mr. Mouâtassim also emphasized the strengthening of efforts and the consolidation of partnerships between the various actors concerned and the implementation of the recommendations resulting from the work of the National Assizes on the fight against illiteracy organized under the sign “Fight against illiteracy, equity, commitment and partnership”.

At the local level, Mr. Mouâtassim said that the municipality of Salé has joined the efforts to fight against illiteracy and supports associations active in this area, through the granting of annual scholarships, the creation of spaces for development for the targeted categories who benefit from literacy courses in the various districts, adding that the communal council is planning to establish cooperation with stakeholders and conclude program contracts with the National Agency for the fight against illiteracy (ANCLA) to broaden the list of beneficiaries of illiteracy programs in the city. 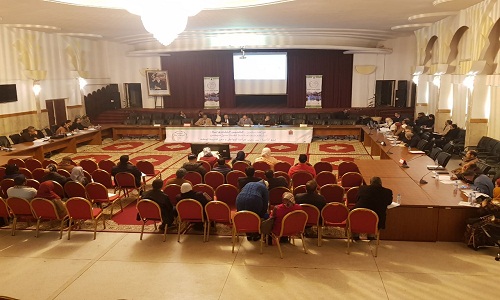 For his part, ANCLA Director Mahmoud Abdessamih said that ANCLA has achieved a positive record in the fight against illiteracy, stressing the need to coordinate and unify all stakeholders to achieve the objectives expected in the national strategy against illiteracy aimed at reducing the illiteracy rate from 20% in 2021 to at least 10% in 2026.
Mr. Abdessamih assured that the fight against illiteracy is at the heart of the strategies and objectives, including the communal program, post-literacy program, youth program, program against the illiteracy in mosques of the Ministry of Islamic Affairs. , the Functional Literacy (AF) program in the craft sector, sea fishing and agriculture.
In this sense, he indicated the ANCLA ensures the reinforcement of the bases of the good governance, the improvement of the quality of teaching and the adaptation between the supply and the demand, according to the principles of equity, equality, respecting the individual and society, while giving priority to the rural community, women and youth.
For her part, the representative of the consultative commissions of the boroughs reporting to the municipality of Salé, Fatima Boubekri, presented a presentation on “the vision of the civil society of the phenomenon of illiteracy in Salé and the means to face it”, during which she made a diagnosis of the illiteracy situation in Salé.
It highlighted the lack of a local policy to fight against illiteracy, the shortcomings in teaching methods, continuing training for supervisors and incentives for members, stressing the need to Adopt the decentralization process at ANCLA, set up local strategies for the fight against illiteracy, improve and diversify communication tools and develop a guide for supervisors, while ensuring the sustainability of the partnership with associations, in order to benefit from their successful experiences.

The second session of this meeting was devoted to debates and consultations with the public, for the elaboration of proposals and recommendations, which will be included in the work program of the steering committee of the Thursday of Concertation in view of their realization.